On 18th December 2017, we received the Certificate of incorporation (construction company) from the Binh Dinh province Department of Planning and Investment. 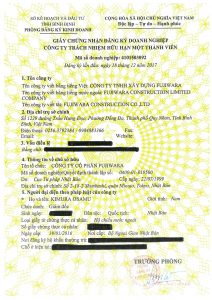 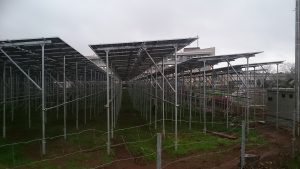 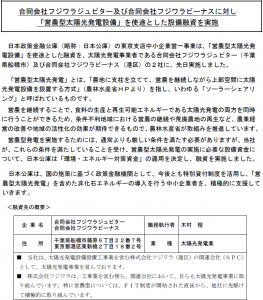 Mega Solar Project was published on The Daily NNA Vietnam

Fujiwara inc invested 64 million USD (720 million yen) to the 64 MW generating power plant in the Nhon Hoi economic zone. Its yearly electric generation capacity is 117 GWh and it will provide electricity for 55,420 families.

According to the International Energy Agency (IEA), Japan’s solar power generation capacity is 42.8GW, which is the second in the world.

・Daylight hours in Vietnam are long

On the other hand, there is uncertainty about the loans from Japanese banks, because there are no government guarantees from Vietnam for mega solar projects. Fujiwara mentions that this project may not bring a big profit, but it is important to be a top runner in the field. 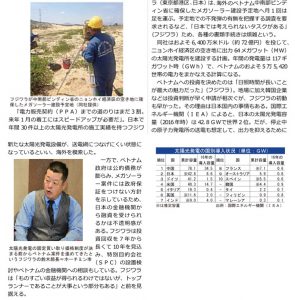 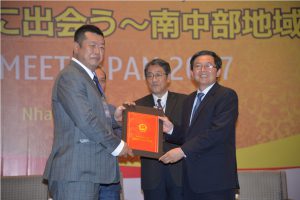 Carrying out the survey in Vietnam 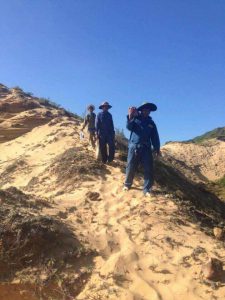 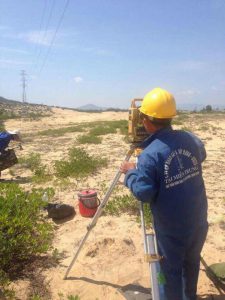 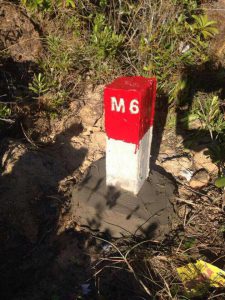 On 8th September 2017, FujiSun (PVT) Ltd was certified (accredited) as an investment holding company accordance with the BOI law. 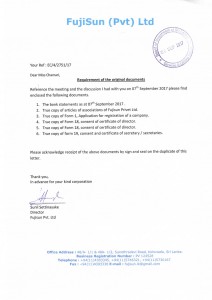 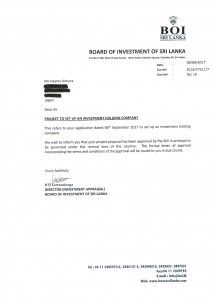 In order to start a solar power generation business in Sri Lanka, FujiSun (PVT) Ltd is co-founded by Fujiwara and Sunteks International. 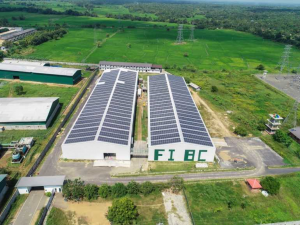 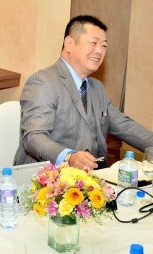 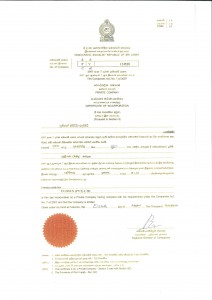 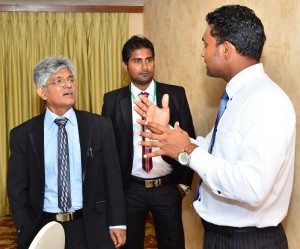 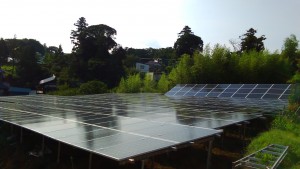 On 13th July 2017, Fujiwara received the Certificate of incorporation from the Binh Dinh province Department of Planning and Investment. 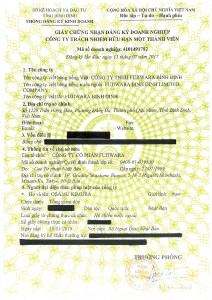 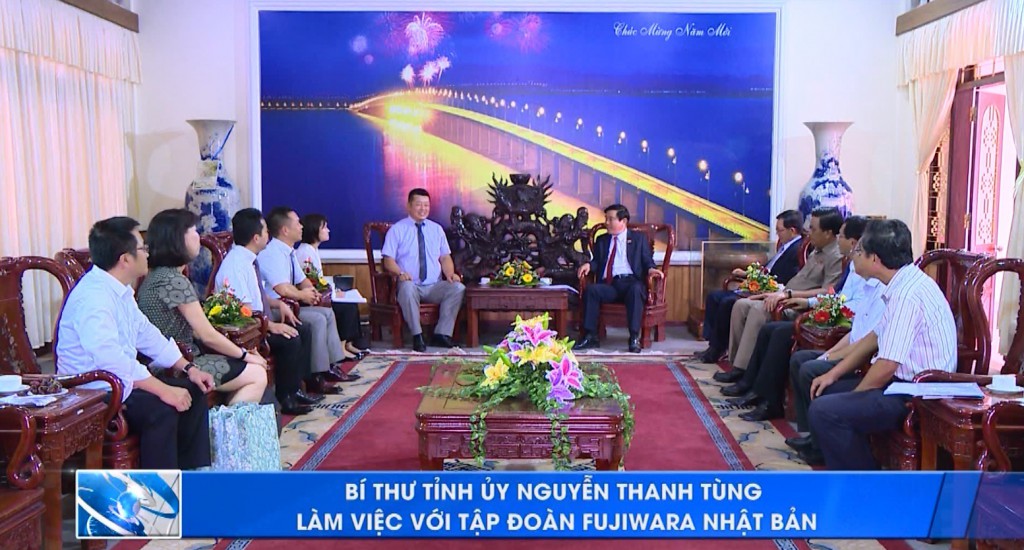 Fujiwara Binh Dinh Limited Company showed its gratitude to Mr. Nguyen (Secretary of the People’s Council chairman in Binh Dinh, the Central Committee of the Communist Party of Vietnam) and other representatives for their prompt support. Mr. Nguyen highly evaluated Fujiwara for carrying out the project in Nhơn Hội economic zone and promised their maximum support to the project.

There are about 10 Japanese companies carrying out projects in the Binh Dinh province. The project land size is 60ha, AC 100MW, 6300 USD total investment, the first phase will finish by the first quarter of 2019.

Sharing the sunlight of tea plantation, established panels in Tenryuu-ku 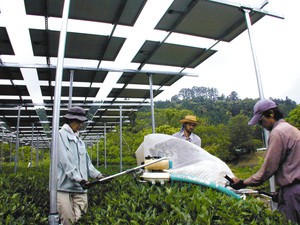 rofit organization OIKOS (Hamamatsu-shi, Tenryu-ku, Ikeda Akira) has converted the agricultural land and established a solar power plant in the tea plantation in Yokogawa, Tenryu-ku, Hamamatsu-shi. The idea of “solar sharing” is spreading over the country, and the use of mountainous area for this purpose may get some attention as a new solution.

According to the NGO, the panels were installed in 3 tea plantations totaling 30 a owned by Mr. Ikeda, in the beginning of the year. The height of the column is 2.3 meter. There is almost no influence of light blocking by the solar power generation panel, and on the contrary, there is the effect of defrosting. The method “Komogake”, which covers the tea plantation with sheets for deepening the taste and protect flavor, is used. In this case, the sheets are hanged through a hook on the support column, preventing the tea leaf from touching the sheet and scratching. The power generation is 150kW and the electricity started being sold from April. This income will be spent for returning the loans, making new investments and expansion. According to Mr. Ikeda, the population in the mountainous area is aging, and preserving the tea plantations is becoming difficult. However, some farmers are showing their interests to this activity. If the income increases from selling electricity, more people may be interested”.

Our solar power construction project was published on “NNA ASIA” 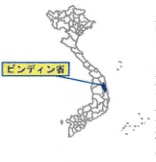 pany operating in the design and construction of solar power generation systems in Tokyo Minato-ku, is implementing a solar generating plant project in Bình Định, central southern area of Vietnam. The power generation of the solar plant in Nhơn Hội economic zone is 64,000kW, with the amount of 6.368 million dollar (7 billion yen) of investment. According to the Saigon times, the project was approved in the end of May. This is the first overseas project of Fujiwara and the first phase will start in 2018. The reasons Fujiwara decided to invest in Vietnam are its sunlight condition and reliable policies, says the representative. Fujiwara is considering investing more in other areas of Vietnam, because they believe the energy demand in the country will keep increasing. 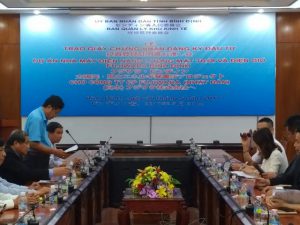 The Binh Dinh Fujiwara Project of Electric Power Plant from Solar Power Energy and Wind Power Energy is an FDI project on the west slope of Phuong Mai Mountain in NEZ with total area of 60 hectares, total investment capital of USD 63.69 million, output electric capacity of 100 MW and the executing period of 50 years since releasing The Investment Certificate.

According to the registered construction schedule, The Project will be started installing in the second quarter of 2017, the first phase will be finished at the beginning of 2019 and whole project will be finished at the beginning of 2020. The output product of The Project is electric power from renewable solar and wind power, which is being considered as special preferential investment attraction of Vietnam Government. After operating, The Project will create about 100 jobs and contribute to the national budget and local social – economic development.

Mr. Osamu Kimura, Chairman of Japanese Fujiwara highly appreciated the kind attention from Binh Dinh Provincial leaders, including The People’s Committee, BEZA, provincial departments and trades since searching investment opportunities in Binh Dinh Province. He also committed to quickly set up and put The Project under operation according to the registered plan. 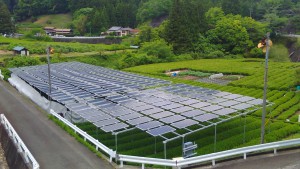 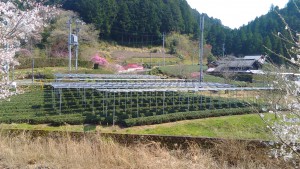 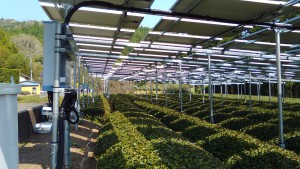 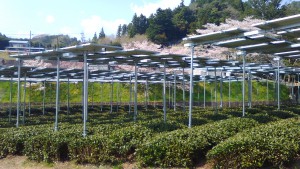 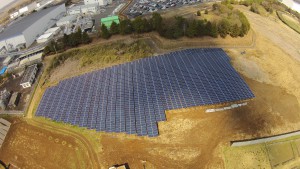 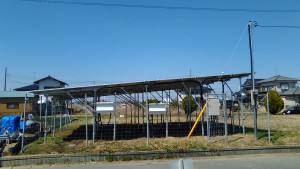 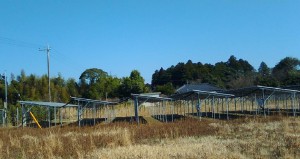 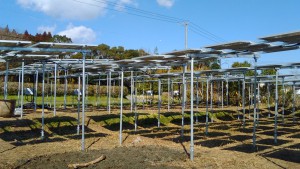 Solar sharing in the Blueberry plantation

In the morning of February 24th 2017, Mr. Phan Cao Thang – Permanent Deputy Chairman of Binh Dinh Provincial People’s Committee together with representatives of the assistant agencies, consisting of Binh Dinh Economic Zone Authority (BEZA) and the departments such as Foreign Affair, Investment and Planning, Natural Resources and Environment, Industry & Trade, and the related others welcomed and worked with Japanese Fujiwara Company.

At the meeting, Mr. Phan Cao Thang and the others related from Binh Dinh Province were introduced about the modernest technology of solar power generating systems which has been successfully applied by Fujiwara in Japan and some other nations. The advantages of this technology is to make huge electric solar power in a narrow area. They can install solar panels on a tea plantation and do it in the later years so that this method help the farmers get double-income, one from cultivation and another by selling of electric power. This kind of technology has been increasingly expanded in Japan where there are the world’s leading earthquakes and natural disasters of typhoon occur every year. Therefore, when constructing structures, Fujiwara set up strict standards to rarely provide to the customers all over the world. However, at the meeting, Fujiwara leaders want to invest a project of solar power generating system in an area from 10 hectares to 100 hectares, locating near the substation of Vietnam Electricity (EVN).

Then the leaders of BEZA and Industry & Trade Department shared some information on existing renewable energy projects in Binh Dinh Province. At the moment, there are 08 investors on 04 locations in Phu Cat District and Phu My District. In Phuong Mai Peninsula, there is an area of about 1,000 hectares on mountain slopes with the height of  250 meters from sea level where can be carried out the project of solar power generator. And at the present, the national electric power system can be connected easily to the location in NEZ. Fujiwara leadership members were very interested in the given information and kindly request Binh Dinh Provincial Leaders to survey the locations and to give the best condition in quick investment procedure processing.

Purpose of the visit : to visit the scheduled construction site of the solar power generation plant

The visit lasted for 5 days from February 20 to February 24. Vigorous opinions were exchanged among ministries and agencies, and we received promises to get full cooperation in Fujiwara’s Vietnam solar power generation construction. 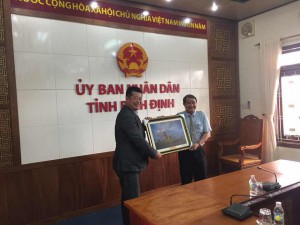